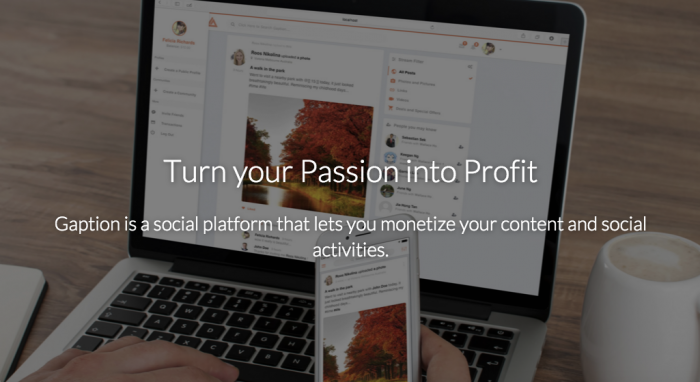 “We’re all about empowering people to pursue their passion,” said Kenneth, the CEO and Founder of Gaption, “Other platforms aren’t.” This is one of the key underlying differences that Kenneth believes sets them apart from other social networks like Facebook, Twitter or Instagram.

While each of these platforms is an avenue that social media influencers can use to generate traction, build a loyal fan base, and to generate revenue, it often alienates the rest of the user base from ever achieving such feats.

However, Gaption on the other hand encourages all its users to actively pursue their respective passions by financially rewarding them every time they create content or use the platform. Essentially, it’s an avenue that people can use to turn their passions (and time) into a profit.

To encourage people to actively create content and to engage with it, this platform has a remuneration model in place that distributes part of its revenue to users. This model was idealistically set in place to acknowledge people and to support them every time they create content.

Although every user is remunerated for their content and their social activity, a simple fact is that users who frequently use the platform to create ‘good’ content are able to earn rewards quicker than others. In fact, users automatically have an edge when they create content that’s original, and content that’s able to generate positive engagement and views.

This model of rewarding users is something that the team at Gaption believes will be a source of spending power for their users and in the long run, a model that will accelerate the process of creating a strong commerce based economy within their ecosystem.

“Gaption has always been about empowering people to monetise their passions. It’s what we’ve always focused on and what we’ll continue to strive towards,” Kenneth said.

Given that people are more receptive towards the intended purpose of a product rather than its functionality, Gaption is a platform that boasts a user group of over 50,000 users from countries like U.S.A., Singapore, Malaysia, UK, Canada, Brazil, Taiwan, Japan, among others (in descending order). There are also more women than men on the platform between the age groups of 18 to 24 and most of them can comprehend English.

Previously 70% of their users were from the U.S. but that number has dropped to about 30% because they were able to significantly grow their Malaysian and Singaporean user-base.

Currently, about 28% of their total users are from Malaysia alone.

Kenneth feels that two main underlying reasons behind such a demographic breakdown is that Americans are more open to explore and experiment with newer platforms whereas Malaysians on the other hand require validation from their friends and family before giving a platform a go. Also, large portions of Malaysians use Android devices, and thus were unable to use the platform, as it’s currently availble on iOS, and on the Web (Beta).

In order to cater to more Malaysians and more Android users, the team at Gaption is currently working to improve the functionality of their existing web app to make their platform more exciting for desktop activities. Also they are working on a release for Android that’s scheduled for the end of the year.

In fact, they already have more than 30,000 potential users on the waitlist for the platform’s Android release.

While building a good product that caters to many users is key, building a good business is just as important, if not more. Wallace Ho said, “At the end of the day, venture capitalists and investors only look at the money and returns. They don’t care about your idea or your big plans to change the world.”

“If your business can’t drive positive revenue, there’s a slim chance you will get any form of funding. A good business isn’t just about revenue. It’s about building good culture, good partnerships, and strong relationships as well,” Wallace added.

To further drive value for their users, Gaption’s team recently launched their Accelerated Connectivity Engine (A.C.E.), a virtual assistant-like matchmaking system that automatically connects users with service providers on the platform. The responsibility of their accelerated connectivity engine is to make it extremely easy for their users to find what they’re looking for without having the need to search for it elsewhere.

“We wanted a simpler way to connect people with service providers on our platform, and we didn’t want users to have to search for it. We also noticed that there’s a sudden influx of ‘concierge’ and on-demand services that has emerged in the market, and we felt it would be great if users could easily connect with them via our platform,” Benjamin Tan added.

Through A.C.E., Gaption provides you with a list of services such as virtual tasks (web design, graphic design, etc.), food delivery, support and repairs, among many others, that you can choose from. Once you select a particular service, it will automatically redirect you to the specific service provider that you can then deal with.

To kickstart A.C.E. in Malaysia, they fostered a partnership with a local personal concierge service called Helpr to handle most of the requests. Kenneth highlighted that they have a particularly close relationship with Helpr, and hence it was a no-brainer to partner with them first. He also mentioned that they are open to exploring possible partnerships with other service providers as well.

Given that Gaption’s user base is significantly diverse, A.C.E. has been currently deployed for use in Malaysia, Singapore and the U.S. They will also roll out the service in other countries like the Philippines, Japan, Australia and many more, once the service is more stable in the 3 countries.

Speaking about the performance of the service Kenneth said, “It’s been improving, particularly in the US.” However, the common feedback that the team received from customers and service providers alike is to have a wider range of categories and services coupled with a more seamless way for them to contribute as a service provider.

In the coming months, Gaption will be working to introduce more providers onto the platform along with better matching capabilities, and an easier way for people to apply as a provider.

From the time they first started, the team of 5 has made significant in-roads on the platform by building something that’s much different from a social network. Kenneth said, “We didn’t set out to build a ‘social platform’, although we do that very well. Our goal has always been to empower people through our platform to help them pursue what they’re truly passionate about.”

He also added, “We’ve always seen Gaption as a digital ecosystem that brings together a variety of services, by connecting them all via the social environment.”

Since then, they’ve overhauled the UI, introduced a web app, A.C.E., and most recently an app for the iPad as well. They will also be releasing an Android version in the coming months.