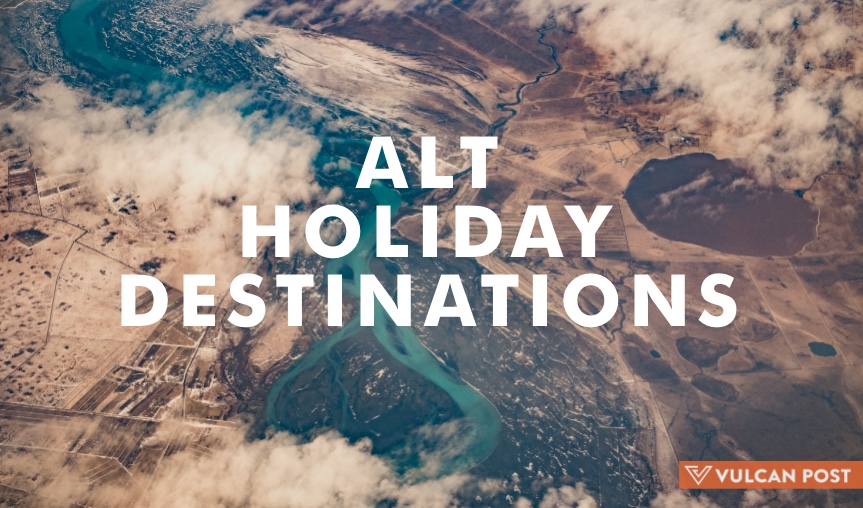 When all the passports of the world are put together and ranked according to how powerful they are — determined by the number of other countries a passport holder can visit without a visa or by attaining a visa upon arrival — Singapore takes the number 5 spot. This beats out a lot of other bigger countries, and allows Singapore citizens to visit as many as 169 countries around the world.

Not all these 169 countries are blessed with a Disneyland, a famed shopping strip, pretty beaches or a smattering of 5-star hotels, mind you, but it doesn’t mean that they are not worth travelling to. From drug tours to trekking in extreme conditions, here’re some not quite mainstream places to go to for a holiday.

Check out if the countries you have your eye on requires a visa here.

Singapore is 1 out of 2 countries permitted to enter the elusive North Korea without needing a visa (the other is Malaysia) if you are travelling for business purposes. All you need is a Letter of Confirmation issued by the Singapore Business Federation (SBF).

If you ever felt like South Korea is too commercialised, or too mainstream for you — why not try going to North Korea? You might laugh at the idea at first, but think about it: you’ll be one of the few people allowed to see the country that has been called the “hermit kingdom” for years, thanks to its closed borders.

There’s Machu Picchu, there’s the gruelling Inca trail, there’s heaps of great ceviche and locally made alcohol. Besides beautiful landscapes like exotic jungles and coastal deserts, Peru also packs a ton of history and diversity. If you’re looking for a culture fix in your travels, South America would be an excellent choice.

Almost six decades of communism may have stripped Cuba of its material wealth, but the country’s cultural riches — from salsa to ballet, jazz to Caribbean percussions — have been preserved. Imagine a country frozen in time, where cars still look vintage, buildings retain their colonial architecture, and an old school charm still surrounds the country. This is perhaps not for amateur travellers, but it’s best to visit Cuba before the US embargo lifts and the authenticism fades away.

In the 80s and 90s, Colombia controlled about 85% of the cocaine drug trade in the Americas, putting it on the map. But that Colombia, a country of conflict and cartels, has largely disappeared and has now been replaced by a rejuvenated capital of Bogota and a resilient culture that refuses to be bogged down by the dark days. There’s great coffee, amazing history, beautiful beaches, and also the intriguing world of drug tourism.

When you think of Europe, you’d most likely think of the UK, France, Germany — the usual. But somewhere in East Europe, there is a place that still hasn’t been thoroughly worked by the tourism industry. Swimming and seafood, art and the archipelagos — Croatia is enchanting. If you’re a Game Of Thrones fan, Dubrovnik, Split and Trsteno in Croatia are some of the key locations used for filming, so go forth, Valar Morghulis.

This is the land of sheep, northern lights, Bjork, volcanoes with unpronounceable names, Nordic history, fjords, and harsh terrain, if you’re planning on hiking (and you should). Aside from the cosmopolitan centre of Reykjavík, Iceland is a place where nature reigns supreme. All of their national parks are free for visitors, so make sure you check out some of the ice plains, hot springs, and mud pools.

When it comes to Mongolia, you have to be prepared to rough it out. Its untamed beauty and isolated landscapes has attracted many seasoned travellers. You’ll encounter monks, nomads, yaks, camels and a rich culture and way of life that is completely different from most.

Once named as the happiest country in the world, Denmark in pictures is akin to looking at a page out of a fairytale book. The buildings look so pretty, people look so happy, they have the best restaurants in the world — is this it?

There’s more to Denmark than just that, of course, but with their Viking heritage, photogenic streets and cuisine that you’re probably not accustomed to, you’ll definitely feel like you’re properly out of Singapore.