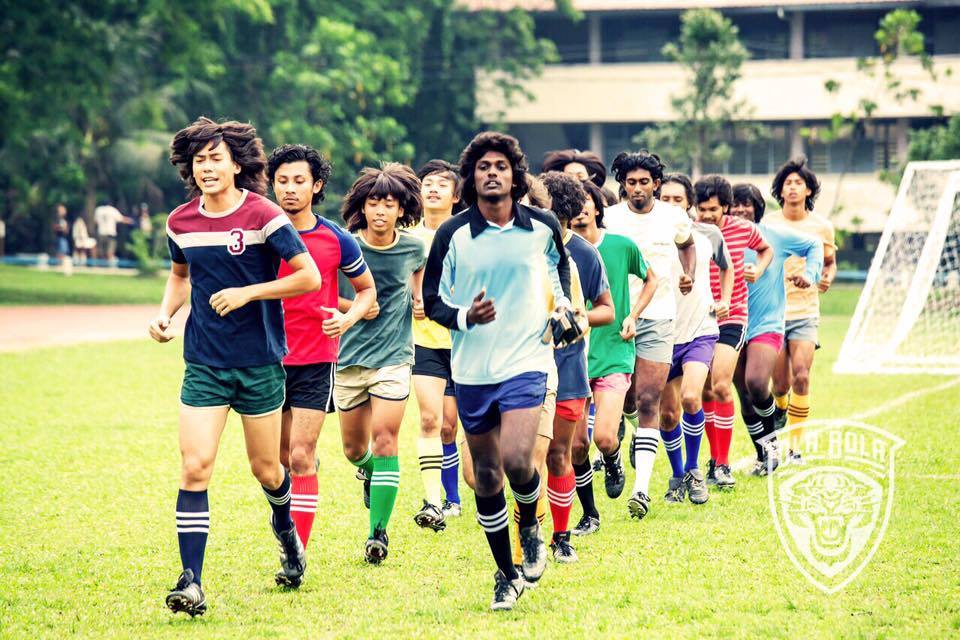 As the lights gradually dimmed over the cinema hall, I took a quick glance around me and what I saw were faces of different races. Sure, any other movie, be it Star Wars or Sepet would bring about a diverse audience as well, but this movie was different. Local movies tend to draw in a smaller crowd as opposed to foreign or Western movies, hence I was pleasantly surprised that many Malaysians have been raving about Ola Bola as soon as it was released in the cinemas.

Ola Bola is a movie mainly set in the 1980s era and it depicts the life of a team of dedicated national football players, namely the Harimau Malaya team during their glory days. It also tells the story of a broadcast journalist, Marianne who is tasked with following up on the story of the team, and despite her being already jaded with her current career, decides to perform her ‘final task’ to the best of her abilities.

I have to admit, I have not watched many Malaysian movies in the past. However, The Game, which is the last Malaysian movie I have seen, happened to be a good one. Thus, I decided to give the much raved about Ola Bola a go, and I did not want to get my hopes up, but when the lights came on at the end of the movie, I learnt why many had believed in this film. In fact, here are 7 reasons why Ola Bola gives the Malaysian movie scene hope.

1. It does not take footie knowledge to enjoy the film.

I would be the worst candidate to watch a football game with, as I’m not aware of how the game flows and I’ll probably be asking one too many questions. With football-themed Ola Bola, it wasn’t so much on the technical aspect of the game itself, but rather, emphasis was placed on the emotions of the players. At the end of the day, I may not know how many players are on each side of the match, but I know their familial backgrounds. That was something even those who have absolutely no footie knowledge can comprehend and most importantly, enjoy. Hence, even if only a small percentage of viewers are football-savvy individuals, it would still be a movie which is relatable to the masses.

2. The diversity of languages represents a large group of cultures.

Most Malaysian movies would be conveyed in one language alone, or perhaps two at most. While watching Ola Bola, I had lost count of how many dialects and languages were spoken. For those which I could not understand, the subtitles came in handy, but for those which I could, it just made the movie more personable to me. I enjoyed that aspect of the film and how the myriad of cultures blended seamlessly with one another. This is something which Malaysian films could pick up on to incorporate, so as to make their films more relatable for locals.

3. It was an enjoyable lesson in history.

I’m vaguely aware of the fashion in the 1980s from the photo albums which my parents have tucked away on the shelves at our home, but I’ve never actually seen a movie with 80s Malaysian fashion. This is not forgetting the funky hairstyles which the characters had. It was a rather accurate depiction of the era, and it was something different that the Malaysian movie scene could offer us movie-goers, as there aren’t too many local films set in this era.

4. You can’t help rooting for the characters in the film.

You know that you have got the entire audience connected to the film, when the movie-goers feel for the cast, and are rooting for them. I had spent the past hour or so watching how one sport unites a team of players and their community. I can’t help feeling invested in their experience, and wanting them to achieve the best possible position in the world stage which they can attain as a team. Clearly, I was not the only one who felt that way, as my social media feed was filled with those who feel the same way as I do.

5. Ola Bola did not skimp on the cinematographic experience.

It may be a story about a team of football players, but in essence, they are more like brothers. This is a strong enough theme for the production house to run away with, but they weren’t being lazy or careless with Ola Bola. The views that the film provided was spellbinding just as well. Hence, while I felt emotionally connected to the cast, I was also attracted to the cinematography which made Malaysia look like the beauty it rightfully is. Helicopter views of mountains and paddy fields, slow-mo shots of the players as they battle it out on the field, those were the memorable visual shots of the film, and it was a great effort from our local production house.

6. The spirit of brotherhood is an amazing one to witness.

The term ‘brother’ is used a fair amount of time in the movie, and even when it is not mentioned, the audience could feel it. Despite being competitive players on the field, they are brothers through and through. For instance, when the character Muthu’s brothers were involved in an accident, team captain Kwok Keong borrowed a car when he had none, just so he could rush his team member to the hospital. He went out of his way to make sure that he could be there for a fellow brother, and that is a unique connection that I could feel between the players, for they proved that they were more than just national football players. They were human.

7. Passion runs deep for these guys, and passion is a good crowd-puller.

When I watched the film version of the historic incident, I can’t help feeling pride. Their passion for the sport is not for fame, nor was it for fortune. It was simply because they loved it and you could see it in their eyes. That is something which the local movie scene could leverage on for their future films, for there is nothing more genuine than that.

Perhaps this quality is what resonated with the audience members, as not many movies will see the crowd staying back, just to watch the credits. It was obvious that the history behind the movie is compelling enough even for movie-goers who may not know much about the Harimau Malaya during their glory days. As pictures of the actual team was displayed at the end of the movie, it was nice to finally place an actual face to these local heroic icons.

Also Read
No, Doing That “Be Like Bill” Quiz On Facebook Does Not Make You Smart. Here’s Why.
Categories: Lifestyle, Opinions, Luminary, Entertainment, M'sianspiration, Malaysian