Truffle to lava custard: 5 S’pore brands that take their mooncake game to the next level 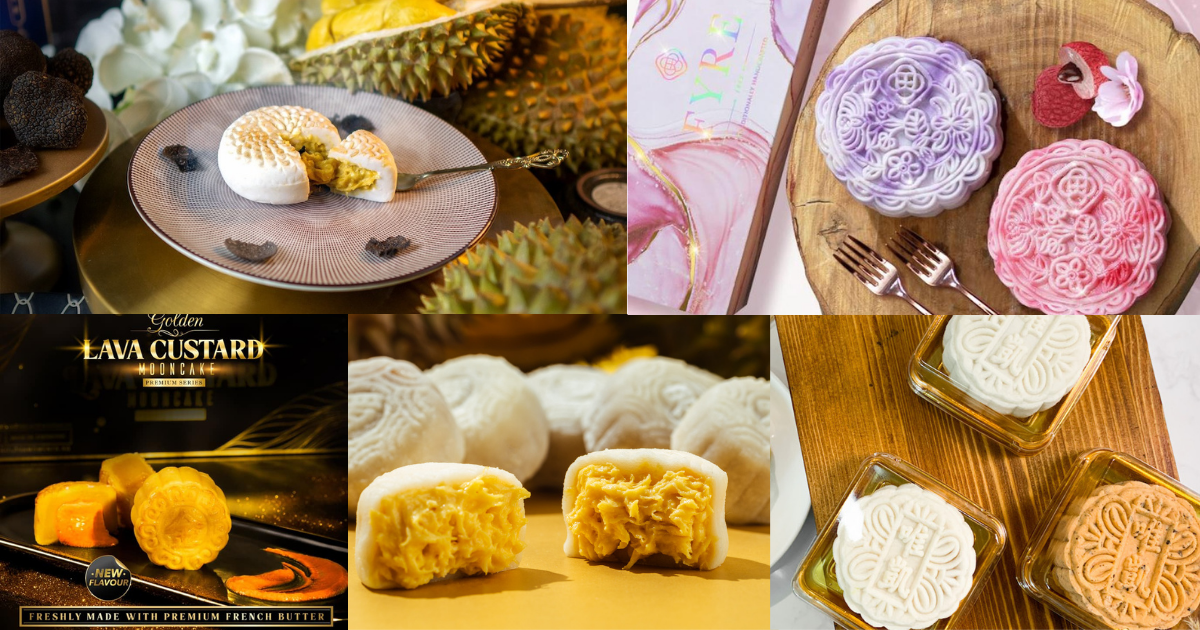 This year, Mid-Autumn Festival falls on September 21, and the season of feasting on mooncakes is well upon us.

However, due to the Covid-19 pandemic, Singaporeans will once again be unable to flock to large-scale mooncake fairs at malls to purchase mooncakes from retailers.

Despite this, brands have successfully pivoted to selling mooncakes via their online stores, giving customers a plethora of options to choose from.

Furthermore, more brands are also stepping up to make their foray into the mooncake industry to own a slice of the pie. This year, we have curated five brands making their mark in the mooncake scene:

They then started experimenting with bold flavours and incorporating them into potato chips to add a modern twist to the conventional snack. They particularly use truffles, which are a highly coveted type of mushroom in Italian cuisine, which are widely known as the “The Mozart of Mushrooms”.

Aroma Truffle has since made a name in the snack world. Earlier in April, its chips were even featured on Korean drama ‘Sell Your Haunted House’, which made its popularity skyrocket in Korea as well.

Besides its bestselling truffle chips, Aroma Truffle has also ventured into the mooncake industry. They created and launched the first-ever truffle mooncakes in August 2019.

Each mooncake is encased in a mochi-like casing and dusted with 24K gold. If you simply cannot get enough of the rich truffle flavours, Aroma Truffle is also selling its mooncakes together in a bundle with its truffle chips.

Indulge in some truffle goodness this Mid-Autumn Festival with Aroma Truffle’s mooncakes:

The brand quickly grew in popularity and received an overwhelming response in its first year, where it achieved six-figures in sales. The product was also sold out in just a month.

“The response was overwhelming and we achieved a six-figure digit with our product being sold out in one month,” said Josiah.

This remains their best-selling product so far and is not surprising, considering that Golden Moments is a pioneering player that sells durian mooncakes in Singapore — and does it well.

Another reason for the brand’s success is its constant focus on innovation. Last year, it introduced new mooncake flavours like Lychee Martini, D24 Durian and Docello Hazelnut.

This year, the brand has once again infused local flavours into its mooncake line. The Classic Pandan Snowskin Mooncake is an all-time favourite — wrapped underneath the slightly chewy snowskin is lotus paste infused with fragrant pandan enveloping a white chocolate truffle for a sweet kick.

On the other hand, The Golden Lava Custard is Golden Moment’s premiering traditional baked-skin mooncake. The layers are perfectly finessed with a beautifully baked crust, creamy custard, and a molten lava yolk.

A gastronomic parade of flavours await you and your loved ones this Mid-Autumn, get them on VP Label now:

ONLYKAI was started by banking and finance graduate Matthew Shia. The 28-year-old picked up baking as a hobby in 2014, and has since expanded his brand into a full-fledged home-based business.

It started out with just five flavours on the menu in 2014, which has grown to include over 35 items. Matthew reasoned that he’s always on the lookout for inspiration to create new flavours to appeal to customers.

I would formulate flavours in my head throughout the day, imagining how the certain fruits can come together, or how I can put a modern twist to traditional flavours.

Matthew told Vulcan Post that he has always thought of himself as a traditional person, and the dwindling interest in traditional festivals like Chinese New Year and Mid-Autumn Festival prompted him to find a way to keep the spark of these festivals alive. He figured that there’s no better way to do this than through his baked goods.

ONLYKAI fuses modern flavours into its snowskin mooncakes. For example, Thai Milk Tea has been a reigning favourite among Singaporeans, so the ONLYKAI team has since created a Thai Milk Tea-flavoured mooncake.

His efforts paid off and each year, the brand receives inquiries on mooncakes even before their mooncake menu is launched. This year, the ONLYKAI team has created an exclusive mooncake flavour for Vulcan Post.

“Vulcan Post is a platform that gives people fresh insights and perspectives on the business and tech landscape. With that as a motivating factor, I decided to create a flavour that’s really refreshing,” said Matthew.

The Earl Grey Yuzu mooncake is a playful twist to the traditional flavours, delivering an amalgamation of tea and citrus in a single bite.

Even as a young boy, 28-year-old Michael Law always had a passion for business. He has always wanted to build something of his own so that he could leave a legacy behind.

However, after graduating with a degree in economics and finance from SIM-RMIT, he began working in a bank instead. He decided to leave his banking job at “the worst possible time”, during the peak of the Covid-19 pandemic in early 2020.

I stayed at home for about a month, reflecting on what my next steps should be. I began to sell during through my network. Honestly, it all started with me picking up my phone and texting everyone I knew.

Durian Law was founded in March 2020, when Michael started selling durians via WhatsApp. Michael had wanted to create a “true blue durian brand” in Singapore, selling only durian-related products.

His strong inclination to become a business owner, coupled with his knowledge in the fruit business and the unique fact that most Singaporeans deem durian as valuable, encouraged him to get into the business of selling durians.

Despite the brand thriving, he realised that the business would not be sustained by just selling the fruit itself. Therefore, he saw the need to diversify into other products while sticking to his mission of providing quality durians, albeit in various forms for his customers.

His brand is also inspired by his family — Michael’s father had to live his family being in Hong Kong, having worked in Singapore most of his life, which led to Durian Law branching out into mooncakes.

According to Michael, the gifting of mooncakes is a significant part of Hong Kong culture, and the little nuance of selling mooncakes brings him closer to his heritage and family.

Durian Law’s mooncakes are handpicked during the peak of the season, and since the team is very selective with their processes, only the best batch of durians end up in their pastries.

They manually hand peel the durians and process them before filling the mooncakes, without any added ingredients in the fillings.

We tried a gazillion recipes before we eventually found a successful recipe, and we are still continuing to improve it all the time as we believe our flavours can only improve.

We are still in the midst of R&D to innovate and push out a wider range of durian products, so that we can continue to provide quality durians to our customers throughout the year.

Last year, Durian Law managed to completely sell out all its mooncakes, and managed to hit around S$200,000 in total sales last year from selling durians, durian-based pastries, and mooncakes.

Get your hands on Durian Law’s mooncakes this year here:

Amid the Covid-19 pandemic, new player Fyre Singapore popped up in the bak kwa scene with the hopes to disrupt the century-old industry.

Launched last year, Fyre was started by a 29-year-old Singaporean, who wants to be simply addressed as Ong. The brand decided to incorporate the Mala Xiang Guo trend into its jerky, and launched with two flavours: Classic Original 1945 Lychee and Apple Wood Bak Kwa, and Mala.

According to Ong, Fyre achieved six-figure sales within the first two weeks of launch. Now, the brand has decided to venture into the mooncake scene as well.

Fyre Singapore is founded on the value of “redefining traditions”, and the brand believes that traditions can only be preserved through modernity, innovations and perseverance.

It aims to provide every customer with a new experience, which is why it has redefined the traditional Teochew mooncake. Teochew mooncakes originated from the Chaoshan region in the east of Guangdong, and is known for its thousand-layered skin that flakes upon each bite.

Its traditionally-baked and snowskin mooncakes have also received impressive reviews from highly-acclaimed food bloggers. Try them out here:

Be spoilt for choice this Mid-Autumn Festival

From snowskin to the traditional Teochew mooncakes, options are aplenty on VP Label this Mid-Autumn Festival.

VP Label puts together all the best local products for shoppers and readers of Vulcan Post to discover all in one place.

To sweeten the deal, VP Label has partnered with buy now, pay later solution Pace, to give shoppers S$20 off every S$80 spent as long as they check out with Pace.

Enjoy discounts of up to S$300 when you checkout with Pace using the coupon codes below:

Head on down to VP Label to shop these indulgent mooncakes now.