His omakase in Miri failed years ago. Then it returned & was pre-booked for a whole year. 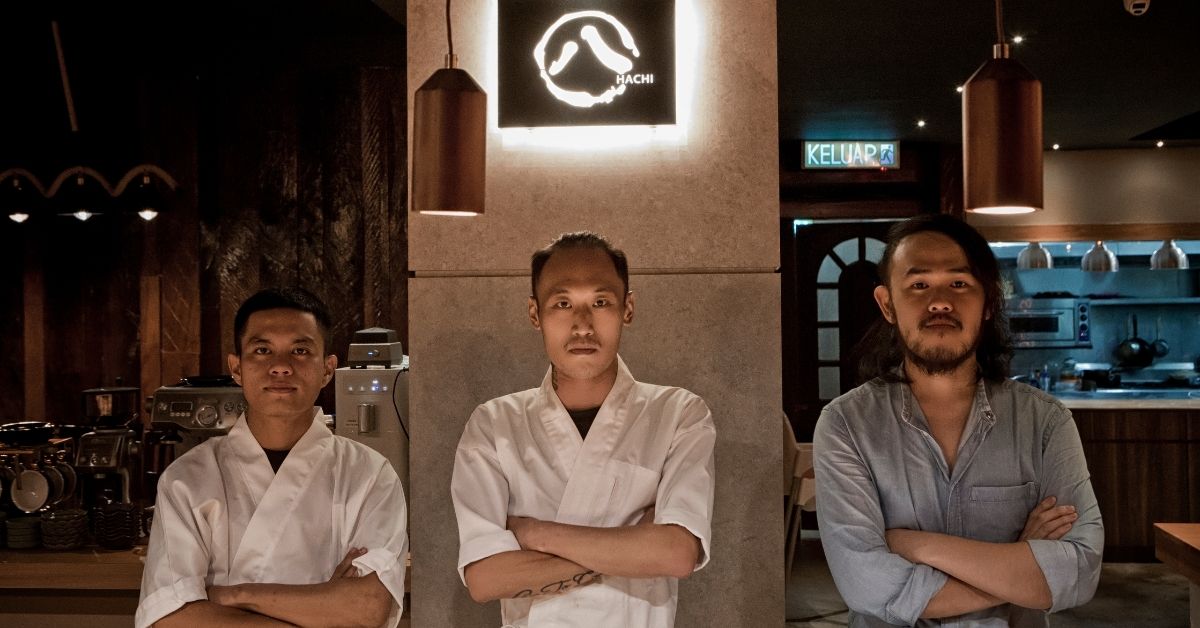 From a young age, Kenny Gan has always been fascinated with the world of cooking. Even before he was exposed to celebrity chefs, he knew that pursuing a career in culinary arts would be in his future.

Raised by his grandma in Miri, he’d spend plenty of time in the kitchen with her, asking questions and helping out wherever he could.

“I think my love for cooking came from a love of eating. It’s the joy of eating something good and the look on others’ faces when they eat something that is good,” he expressed in our interview.

Now at age 33, he’s able to do that for a living, cooking in front of diners at his little omakase restaurant in Miri, called Hachi.

After finishing his culinary programme at Taylor’s University, Kenny managed to intern at the Hilton Kuala Lumpur and Chateau de Mercues in France. Once he graduated, he was mentored by chefs from hotels and restaurants in KL, such as Chef James Thong (known for his culinary career aboard global cruise ships) who used to work with Japanese-born Australian chef, Tetsuya Wakuda, a Michelin Star chef.

Kenny spent about 7 years in KL before returning home to Miri. He even gave up a job offer in France with Le Charlemagne, a 2-star Michelin restaurant, so that he could look after his ageing grandma.

In 2015, Kenny opened up his first restaurant named after himself, Kenny’s.

If at first you don’t succeed…

Kenny’s offered an array of Western food with Japanese influence. The restaurant was stable for a year or so until the oil crisis happened at the end of 2016.

At that time, Kenny decided to change up his restaurant’s concept and offered a carte blanche menu. The concept is similar to Japanese omakase, where a restaurant doesn’t offer any set menu items, but only serves dishes based on fresh ingredients found that day.

“People came, and they walked out. Most of them wanted the old menu, and upon hearing the new concept, they left the restaurant. Miri wasn’t ready for it,” Kenny recalled the experience.

The restaurant would struggle for a year before Kenny decided to shut it down in October 2017. For the next 5 years, he took a break from entrepreneurship to work elsewhere before deciding to come back in 2021 to open up an omakase restaurant, Hachi, inspired by Sarawakian cuisine.

It was my wife who encouraged me to do omakase when I was unsure whether it would work or not. She knows it has always been my dream to do an off-menu item where I can cook what I’d like based on what’s fresh and available and bring out the full potential of the ingredients.

As the name suggests, Hachi (八), the Japanese word for the number 8, is an 8-seater omakase bar situated inside of the original Kenny’s restaurant. “So it’s sort of like a restaurant inside a restaurant,” Kenny said.

The concept for omakase is typically purely Japanese. But at Hachi, ethnic Sarawakian and Chinese ingredients are incorporated into the menu along with imported Japanese seafood and ingredients.

When thinking about ingredients from Sarawak, there’s a general notion that they’re cheap, and in the context of fine dining, their usage is practically unheard of (or at least not a marketing point for restaurants).

Not too long ago, we featured a local omakase restaurant in Bukit Jalil, Eat and Cook, that puts a spin on omakase by using ingredients that can be sourced around Malaysia. It carries the intention of showcasing what neglected local ingredients can do when utilised in a premium way.

“Through our omakase where we get to directly interact with our guests, we are able to educate them about the ingredients we use, where it comes from, and how it’s made. [We get] to teach the locals that we have something that they can be proud of.”

This belief is carried through in why Kenny decided to open up Hachi in the small town of Miri instead of the busier city of Kuching. But being a fine dining restaurant in a small town doesn’t come without its hurdles.

Small restaurant in a small town

“Miri is a small town, most of the time location is not a problem especially when your food is good,” Kenny observed. “Mirians will drive from one end of town to the other just to have dinner and then go back. And during the weekends there are also Bruneians who have a lot of spending power.”

However, Miri’s small population poses a challenge in finding return customers, as there are not enough people in town for high turnover rates.

One 90-minute to 3-hour session of the omakase experience could cost a patron between RM498 to RM1,088/pax, depending on which package is chosen. The curated experience is handled by only 3 staff: Kenny, his kitchen helper, and a sommelier.

But those who understand the value of fine dining won’t find Kenny’s costs discouraging, and it’s clear that there are many who want to get a spot at the table.

Hachi is currently serving a rough 30 to 42 customers a week on average, which is pretty much a full house at the omakase bar each night.

Right now, the restaurant only hosts one dinner session per night, and Hachi is fully booked until mid-December, with some reservations for the end of the year and early next year already in place.

Kenny’s short-term goal for Hachi is to create a stable demand for the omakase experience. “In order to do that, we will need to source for ingredients of the same quality for a slightly lower cost and bring down the overall price so everyone can have a chance to experience it,” Kenny hoped.

His long-term goal is to have the restaurant reach a self-sustaining stage, so Kenny can be more hands-off to open up more specialty restaurants that only serve one thing at its best quality.

Also Read
COVID-19 has driven the need for secure online signatures, which is this M’sian team’s forte