How To Be A Pro At Crossy Road, The Game With The Cutest Pixelated Roadkill 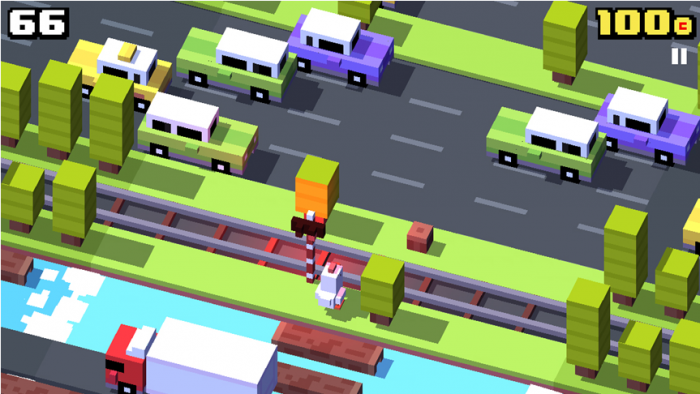 Say hello to the big brother of Frogger and he’s absolutely adorable. Crossy Road by Hipster Whale takes a classic game from the 80s and dresses him up in whimsical retro pixels. Much like Frogger of the past, the aim of the game is to get as far as you can without dying.

Gameplay options include tapping to move forward and swiping to move backwards or sideways.

Choose from a virtual smorgasbord of eccentric unpredictable characters that are each in their own way delightful! So keep on reading if you want to figure out how to get the chicken to cross the road—without becoming roadkill.

In Crossy Road death is all around you in the form of cars, trains, rivers as well as a giant eagle that will swoop you up if you hang around too long. The key is to plan and think at least three moves ahead (or 20, if you’re amazing at this game). All the obstacles have their own rhythm and can be timed accordingly.

It would be best while playing to not look directly at your character but instead in front of him, preferably in landscape mode to better anticipate obstacles. By training your movements this way it’s much easier to map out a path and get a feel of the routes. Try and stay towards the middle of the map as this gives you more options when crossing the river as well as a clearer view of the obstacles coming your way.

Concentration and timing is imminent to your survival in this game. Keep your fingers comfortable so you don’t accidentally tap or swipe when you don’t mean to. Some people count the number of taps to get across, which is something to try if you find yourself over-tapping a lot.

Don’t Be Afraid To Backtrack

You’ll eventually encounter a route you didn’t plan for. Hedges, Lilly pads and even the odd trees may force you to go out of your way to take an alternative route. This can end up leaving you trapped on the green or in a much more precarious location. Don’t be afraid to go backwards and try again. Keep in mind though, that if you try to go too far back an eagle will swoop down to eat you.

Going backwards is a much better alternative than trying to outrun cars by swiping sideways, which through experience hardly ever works. It’s like those movies where you see them running along the train tracks and then diving out at the last second just as the train is about to hit them, only to survive miraculously. If you try and do that with a train in Crossy Road, you will die—so just don’t.

To be fair, Crossy Road does give you ample warning for obstacles that you can’t dodge. The first being the train, which you’ll see coming by looking at the stop light on the train tracks. If you’re hopping and see it turn red, DO NOT ATTEMPT TO CROSS (same rule applies in real life). Take this into account when planning ahead and if you’re unsure of when a train may come just wait for it to cross and then proceed, that way you know you’ll have some time before crossing.

The second obstacle is the police car, they move twice as fast as a normal car and are impossible to dodge. You’ll know it’s coming by the red-and-blue flashing lights on the sides of your screen. For added warnings turn on your sound. Trains will make an alarm and Police Cars will have the sound of a police siren. This will give you about a one second head’s up before the cop car zooms by.

Greed Will Be Your Downfall

Much like Midas and his quest for gold, greed for coins in Crossy Road will ultimately be your downfall. Focusing on collecting coins opposed to staying on point and planning your crossing will definitely lead you to death much faster. The reason being that as mentioned, timing and concentration are the key skills to staying alive in this game so if you’re distracted opposed to planning your moves, it will most likely lead to you dying.

I’d advise you to just collect coins that are on the way or within reach. In fact collecting one coin by one coin is a tedious method to try and earn the 100 coins needed for the lottery spin, it’s frankly much easier to just watch an ad instead.

The whimsical pixel characters are by far the best part of Crossy Road, there are 50 different characters to choose from and each have their own eccentricities. All the animals are played in the same way and none are intrinsically better than the other. They do however individually make their own sounds and some will even have their own environment or events while playing.

Some animals to watch out for if you’re dedicated to breaking your high score would be:

Much Doge, the adorable Shiba Inu meme. While in the game, ‘Doge Quotes’ will pop up on screen that tend to pile up and obscure visibility.

The Grave Digger will change the environment to darkness with only a small lamp to light the way. It’s difficult to see more than three lanes, thereby making it harder to plan your moves.

Frankenstein will tint the world in grainy black and white with brief flashes of lightning. It gets extra challenging because all the coins, obstacles and especially the red train light do not stand out, making it harder to avoid.

Disco Zoo is just distracting (but hilarious). Other animals appear all over the screen stare at you disconcertingly and clutter up the pathway giving you less room to move. Every so often, the lights go off and everyone starts disco dancing.

These are just some of the distracting characters that make up the adorableness of Crossy Road, but you should try them all out. Eventually, you’ll find one that suits you, whether it’s a capybara, a chicken or a bowl of kimchi (no judgment). Just remember to concentrate, have fun and get ready to watch your character drown, get squished and eaten by eagles many times over. As Matt Hall the creator of Cross Road said, “Funny deaths are the key to success!”

You can download Crossy Road from Google Play or from iTunes.

Also Read
How To Be A Pro At Smash Hit, A Mobile Game Where The Balls Do Matter
Categories: Opinions, Entertainment, Gamer, Reviews, Malaysian, Tools and Tips