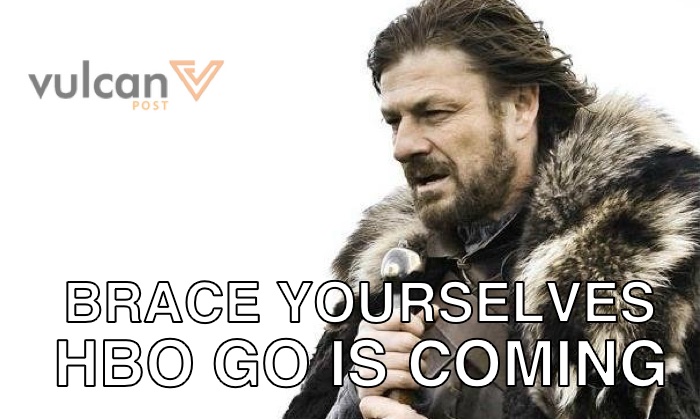 Unless you’re a Game of Thrones fan who’s been waiting patiently for the DVD to be released, you’ve probably done something, well, illegal. But piracy can wait, because we now have a legitimate way to watch our favourite HBO shows.

HBO Go, the US network’s brand new online streaming service, is now available in Singapore. The service was previously restricted to American shores, but can now be accessed via a new video streaming platform by Singaporean telco StarHub.

The name of this platform? StarHub Go. Original.

With the launch of the platform as of yesterday, viewers will have full access to 300 hours of HBO and Cinemax Original series and films. According to StarHub, this catalogue is set to grow to 1,000 hours by the end of 2015.

StarHub Go will compete directly with other online streaming services like Malaysia’s iFlix, Singtel’s Hooq, and Toggle, a dedicated online platform for MediaCorp television channels. But having popular HBO titles like Game of Thrones, True Detectives, Entourage, and The Newsroom will definitely give StarHub an advantage — until Netflix gets here, that is.

“There’s so much demand for HBO’s award-winning content that delivering them digitally on multiple devices for our fans to watch on their own terms has been our foremost priority,” says Jonathan Spink, CEO of HBO Asia. “Introducing HBO Asia’s standalone streaming service on StarHub Go without a traditional pay TV subscription is a natural progression for us to reach new audiences.”

StarHub Go’s Go Premium Pack, which offers a mix of HBO and Cinemax Originals, as well as the latest Asian entertainment content, is priced at SGD 19.90 per month, but early adopters who sign up between August 12 and September 30 will pay a special price of SGD 1.99 per month for the first three months. If you’re already subscribed to HBO channels with StarHub, their HBO On Demand will be accessible to you via StarHub Go free-of-charge!

The service is compatible with iOS, Android, Windows 8.1 devices, and PC and Mac computers, though you will have to have Silverlight player installed.

Finally having a legitimate means to watch your favourite TV shows might mean that Game of Thrones, the most pirated television show in 2015, may be knocked off its top rank — to our delight. Though we will have to wait till mid 2016 to enjoy it.