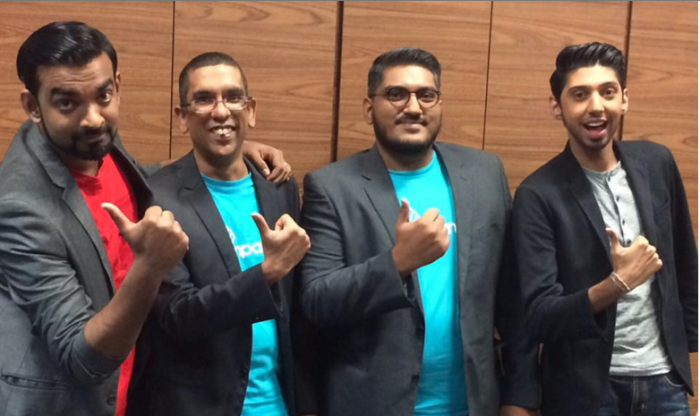 Tumpang (formerly known as Busttle) has gone from providing transport for The Imagine Cup, a world-leading student technology competition organised by Microsoft to becoming a flat rate ride-sharing service that caters to over 3,000 active users within a short space of time.

Born from the cradle of sleepless nights, hard work and little to no personal time, Tumpang is the “blue” Malaysian startup (blue represents cleanness and efficiency) that offers an affordable and efficient transportation alternative for people who’d like to commute to and from short distances right within their neighbourhoods or townships.

Tumpang has proven that their services and features are very different from the likes of other ride-sharing services like Uber and GrabCar.

While that does mean that you can’t use the service to travel all the way from a suburb in KL all the way to KLIA, it does provide a much cleaner and cheaper alternative when you’re travelling to your nearest LRT/MRT or when you’re heading out for lunch with a group of your friends and colleagues.

You only have to pay a flat rate of RM5 if you’re travelling alone and the fare becomes much cheaper every time you travel with your friends. They also offer a subscription service that caters to their regular users who want to avoid the hassle of having to top up their credit every time they run dry.

From Web To Mobile

Given the novelty of the idea, the team first released a minimum viable product in the form of a responsive web app that customers could use to book their trips. And while their user base was steadily growing through their responsive web app, the team quickly directed their efforts into developing a native mobile app.

Dhillon, the co-founder of Tumpang said, “Being a consumer facing flat-ride sharing service means most users aren’t going to be behind their laptops or desktops when they interact with our service—they’re going to be on the move.”

Also in most cases, a web app isn’t ideal especially when real-time location-based information has to be shared between each client. Most web browsers restrict web apps from querying the users’ lower level hardware.

Self-proclaimed tech guys and hackers, co-founders Dhillon and Praburaajan Selvarajan had a clear idea of what they wanted to see in the first iteration of their native mobile app. Praburaajan, also the CTO of Tumpang, led a team of 3 developers and they quickly rolled out a native app for both the iOS platform and the Android platform in about 2 months.

And for those “mavericks” (including myself) that still use a Windows Phone (for reasons only God would understand), the team will also roll out a client that supports the Windows Phone platform as well.

You can download the app from the App Store and the Play Store.

Stylised in blue, the app allows users to quickly create an account on Tumpang by giving them the option to sign up via Facebook. It also verifies your account and your contact details by sending you a verification code that you then have to enter into the app.

Once you’re logged in, you can quickly select your pick up point (if it’s not already the one that the app identifies via GPS) and your drop-off location and book a ride. The app is styled in an Uber-esque fashion (like most ride-sharing apps) that makes the whole experience quite intuitive especially if you’ve used the Uber app before.

Once you book a ride within their coverage area, you will quickly be assigned a driver and you will be notified via both email and SMS. Once you receive the SMS, you’re expected to walk to your pick up point within 5 minutes to avoid delaying other passengers, and if you don’t have mobile data, you can still keep track of the booking number and vehicle number from the SMS notification, which is a neat feature to have.

Apart from the short authentication process, you don’t have to click a lot of buttons or fill a lot of forms to book a ride. You can book a ride in less than three clicks, thanks to the teams intelligent design sense.

Dhillon said, “Being hackers, we like keeping an eye of things as they’re being developed and to potentially catch bugs before they turn into a fatal design flaw. With our native app, we’ve tried to keep the booking process streamlined and the number of clicks or actions needed to make a booking as low as possible,” in regards to their style of app development.

While “going mobile” is pivotal to the success of the platform, the team will continue to support users who insist on using legacy hardware through their responsive web app. This will allow them to appeal to a large chunk of potential users that use a diverse range of smartphones and other devices, and to support the consistent growth of their existing user base.

To give Tumpang a try, you can download their app from the Play Store or the App Store.