Keep Your Fingers Crossed, Uber And GrabCar Could Be Legalised Soon In Malaysia 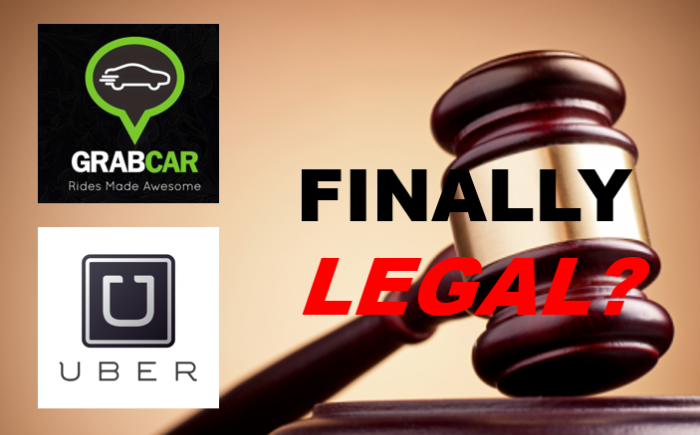 2015 has no doubt been a rough year for private ride-sharing services, but with the new year rolling by in a number of days that we can tick off with both hands, 2016 could spell a new beginning for Uber and GrabCar services alike.

Some have been dubious about whether or not Uber and GrabCar are legal services, and taxi drivers have been using that to their advantage seeing as they are often on the losing end when it comes to pricing and service. As such, it has been a rather hazy situation for the private ride-sharing services which has provided convenience for many who require the usage of public transportation.

As such, in order to lift the clouds over the issue, 2016 might finally see Uber and GrabCar drivers getting legalised once and for all. This would in turn help to put an end to the whole saga between them and regular cabbies as well as with their own customers.

Regulation Is The Key

While consumer associations have been lobbying for Uber and GrabCar to be officially legalised, the government is still pondering on the thought, though it is moving in the right direction.

Public Transport Users Association (4PAM) President, Ajit Johl echoed his support towards the private ride-sharing services to be legalised, but it must be via the terms that they have been regulated first. This is to ensure that the public is protected when they are utilising the services provided by Uber and GrabCar.

Federation of Malaysian Consumers Associations (FOMCA) Secretary-General, Paul Selvaraj agreed as he told Free Malaysia Today that, “In legalising the ride-sharing services, the government must ensure measures to protect consumers, such as insurance or a channel to report errant drivers to the authorities, are in place and complied with.”

Also Read
With This Integrated Partnership, You Can Get An Uber Ride Via Healthcare Platform MyDoc.my

In terms of providing a legal platform for Uber and GrabCar services, this would not permanently solve the underlying issues surrounding the taxi industry.

Noting this, the 4PAM president said that the industry needs a total revamp in totality because times are changing and many in the urban community would utilise technology to call a taxi, instead of hailing them down by the side of the road.

It is paramount to move forward with the times and by using technology such as apps, Ajit said that customers will be able to get details which in the past would have been impossible to obtain prior to stepping into a cab. These details help customers to gauge whether or not they would like to utilise the service in the first place, such as the fare estimate of their ride.

All For Good Service

At the end of the day, the service goes both ways, as consumers just wish to get from point A to point B safely and at an affordable price, and it is up to the drivers whether or not they want to receive repeat customers, by providing a good service in the first place.

Ajit said that by utilising technology, it would ultimately benefit both the taxi drivers and customers. He said that the government should revamp the industry by turning taxi drivers into their own entrepreneurs. Thic can be done by giving them individual licenses, flexibility in the price of their fare, determining the type of car model which they could use, and more.

As such, Ajit said, “It will see fair prices being driven by market forces and give consumers more options, while for taxi drivers, it gives them an incentive to provide better service, granting them greater control over their business and costs.”

If everything works out in line with the aforementioned plan suggested by the 4PAM president, it would be a step forward to the entire taxi industry in total, not just for private ride-sharing services, but for regular cabbies as well. It would be a move in the right direction toward improving the public transportation service in our country, and that would ultimately be a win-win situation for all.