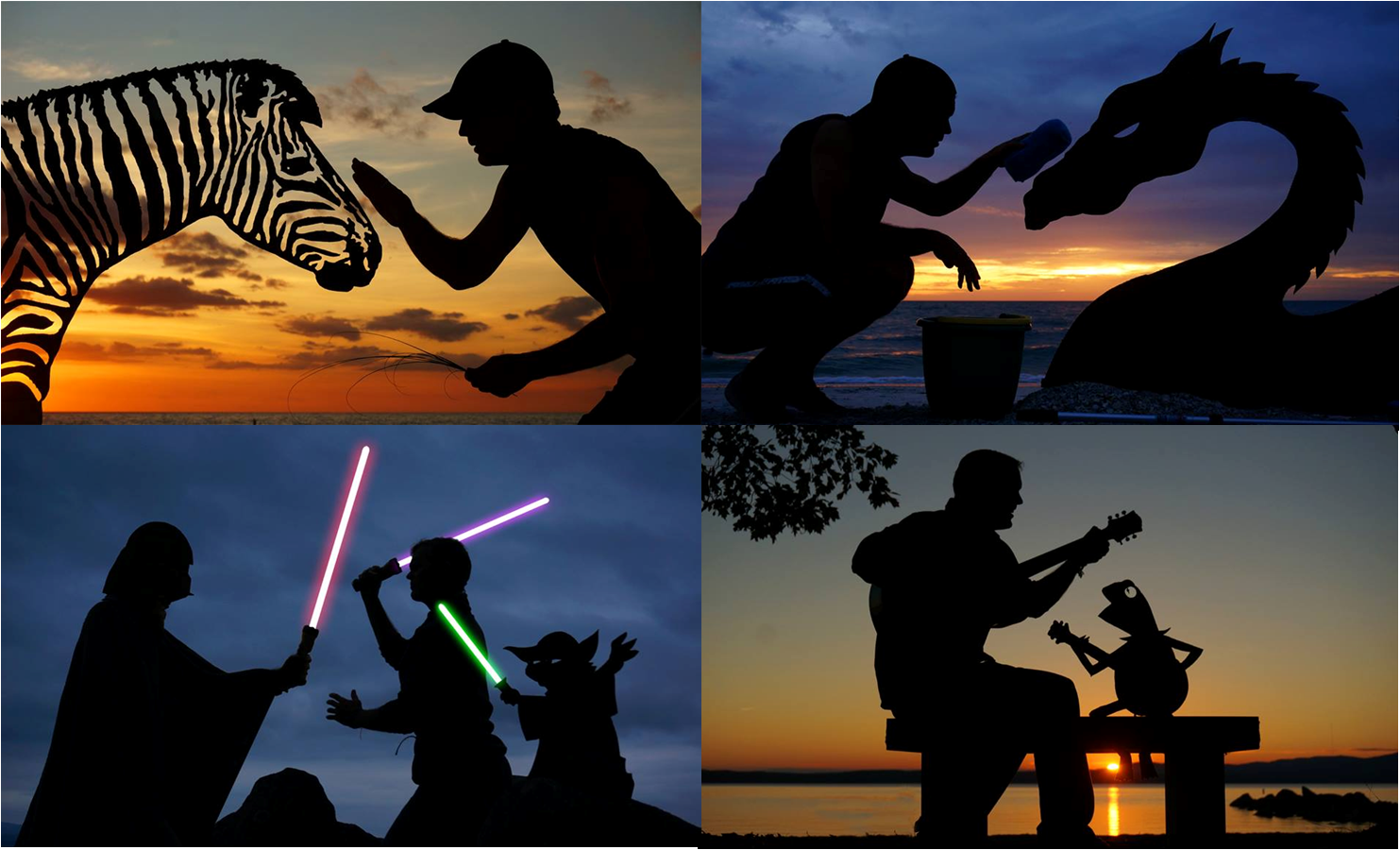 Sunsets are a beautiful reminder that though some things are temporary, you’ll get to witness this bit of temporary, daily for a lifetime. It is also the very same sunset that binds us all together regardless of our location in this world. From his little cabin on Frye Island, Maine, John Marshall witnessed the beauty, and creativity soon manifested within him.

Sunset Selfies are John’s way of capturing the gorgeous sunsets he witnessed from his own back door. In a way, he could finally make the ball of sun at the end of day, just a little more permanent for each and every one of us.

Essentially, silhouettes combined with sunsets are what his close-to-3000-followers-strong project is all about. The only things the nine-time Emmy award-winning TV producer and writer needs in order to create his masterpieces are cardboard mostly from the town dump, a cheap pair of scissors and a common kitchen knife.

“When I’m on the island, I make one cardboard cutout each night and take a silhouette picture with it. The process has a few simple rules and I don’t have any help. I use a ten-second timer on my camera and run into the shot,” John explained on his Facebook page.

He utilises the props found around the cabin or those which he made himself. Among his more popular creations are of dragons, Star War characters, Pinocchio and even The Little Mermaid. His diversity in creating silhouette shots against the island sunset backdrop has earned John hundreds of like.

Having only begun this project for a mere four months, John’s hope is that others, especially kids, will see that they can craft these creations too. “I’d love to see what they come up with. Anyway, for me, there is something magical in these images. I love to watch my crude cutouts come to life in silhouette and then see how people respond to them,” John said.

Perfection Is Not Needed

It’s interesting to see how perfection isn’t required in order to create the shots that can be enjoyed by both young and old. In fact, in broad daylight, the cardboard which make up the eventual silhouette shots are a mixture of masking tape and even marks made with a marker. However, these behind the scene secrets are something his followers simply cannot tell.

Seeing as John himself is a writer, his photos are rightly captioned with witty short stories.

One of John’s followers, @notthatalbino shared a comment on the Instagram page, applauding the project and what it represents. “Thank you for sharing so many Frye sunsets! As an islander myself, it’s even more fabulous to see your work knowing that there’s some Frye magic in it too,” the Instagram user added.

With so many beautiful sunsets in our own country, be it Perhentian or Port Dickson, this magic can even be replicated at some point. For now though, whether your personal interest is photography, sunsets or the effortless creations, Sunset Selfies is a great source of inspiration and entertainment all rolled into one.