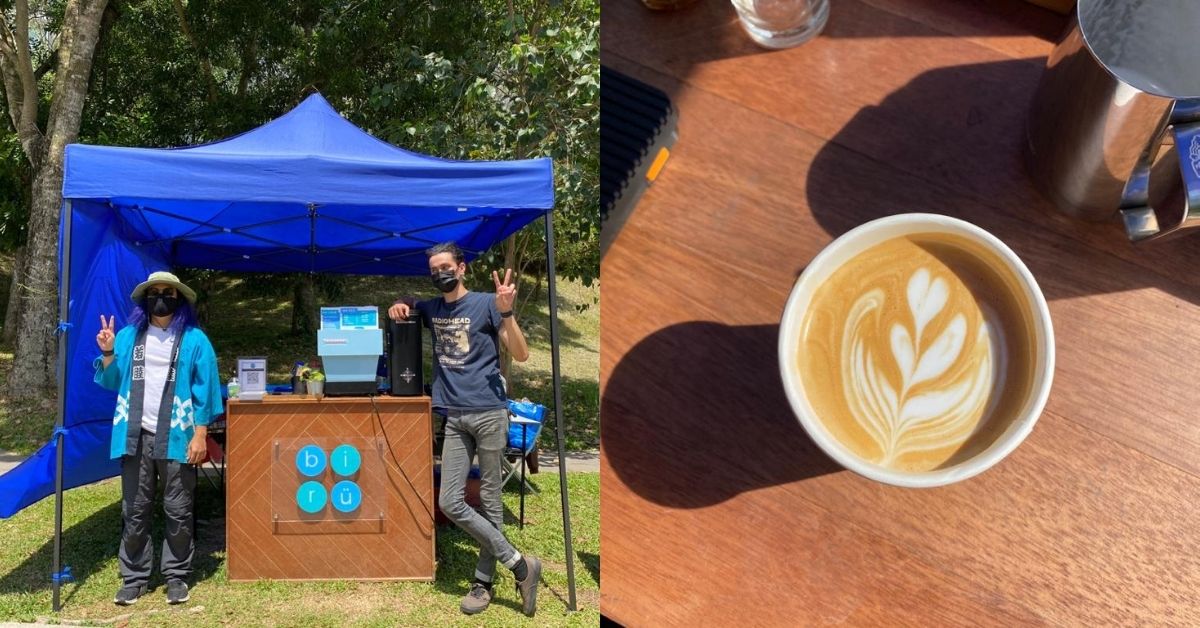 Roadside stalls have a special place in most Malaysians’ hearts. Not only is the food more affordable, but it also sometimes tastes better than what you’d get in a restaurant.

While many F&B owners may aspire to grow their business from tents and tables to brick and mortar, these entrepreneurs are doing quite the opposite for theirs. Like their peers in the industry during COVID-19, Feebay.Co’s founders had their share of losses too, as they shut down their Publika outlet.

Though their branches in Avenue K and Sunway Nexis remained, there was still an urgency to keep their business afloat. So the team wondered, what would be a creative, cost-effective way to bring their cafe closer to our homes besides food deliveries? And then their lightbulb moment came—a roadside stall.

A roadside stall with cafe culture

From afar, birü looks like any other roadside stall with a big tent, coolers, etc. But what would grab one’s attention when they come closer are its espresso machines.

Unlike typical roadside stalls, birü serves specialty coffee—yes, the ones that are made with premium coffee beans and come with latte art.

It’s located opposite Sri Hartamas Park, which was an area that once housed Podgy and the Banker, a local cafe that the Hartamas community missed. Noticing the neighbourhood’s love for specialty coffee, it was only strategic for them to bring this back for the residents to enjoy.

The booth is manned by Feebay.Co’s baristas, and the espresso machines are newly bought with the money earned from selling the old machines from the Publika outlet.

Hence, setting up the stall didn’t cost them too much, as the only investments they had to make were for the tent and generator, which were RM160 and RM850 respectively.

Well, do they charge cafe prices?

Yes, and no. Fried kuey teow and Singapore bee hoon were added to the menu recently, and like the nasi lemak, they’re all RM3 per packet.

You can also add on other things like fried eggs, ayam goreng berempah, sambal sotong, and rendang daging which cost around RM1 to RM5, like at other roadside stalls.

However, their beverage prices are similar to what you would find in a cafe. Their coffee is around RM7 to RM9, and they also have chocolate, mocha, and matcha beverages which are around RM9 to RM12.

Not forgetting their lactose intolerant fans, they include milk alternatives made from oat, soy, and almond, which are an additional RM3. Sweet tooths can also get Gula Melaka, caramel, and hazelnut syrups for an additional RM2.

Busy as a bee

The birü team shared that they have seen similar sales at the remaining Feebay.Co outlets, and that it’s actually a 70% drop from what they usually earn pre-MCO when dine-ins were allowed.

Preparations for these packets are made early in the morning by their head chef, Aqif, who comes in at 5AM daily to cook the fresh nasi lemak, and runs the stall. About 1kg of coffee beans is brought to the booth each day, which is just enough to fill up to 60 cups.

“Being a small stand, we’re challenged with a very tedious opening and closing routine, which involves us carrying heavy equipment that has to be manoeuvred delicately,” Daniel of Feebay.Co shared with Vulcan Post.

“The weather can be unpredictable at times as well. We’ve been lucky that the rain hasn’t been too bad recently but it also means we have to withstand the hot tropical afternoons.”

When they first started, they received feedback from nearby residents that their generator was a bit too noisy, so they crowdfunded for a new, quieter one that cost them RM5K.

“Our crowdfunding went well, and we were surprised by the positive outcome from it as customers gave us a lot of generous tips, and there were some that even donated to us directly to purchase a new generator,” Daniel and Aqif shared gratefully.

As the machines used to make their usual drinks rely on the generator, this can cause problems when it’s out for servicing. On one such day, they had to fill in the gaps with batch-brewed coffee and teh tarik instead.

So far, logistics was the main hurdle that they had to overcome to start this booth. Thankfully, their application for the necessary permissions was smooth, since prior to that they had already applied for Lesen Sementara KL Prihatin, a temporary license issued by DBKL that lets one open a roadside stall to earn income during MCO.

“birü is definitely among our more successful ideas to pivot for Feebay.Co during MCO and should everything go well, we might expand to other neighbourhoods in the future,” Daniel shared their plans with Vulcan Post.