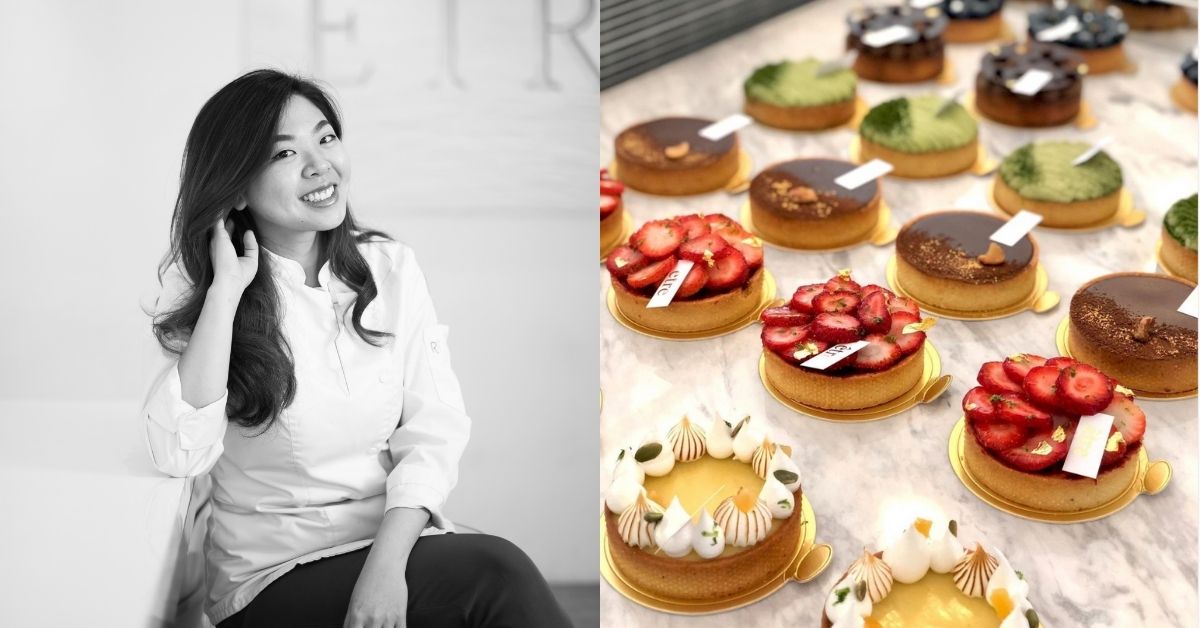 At just 27 years old, Ann has tasted world-class desserts while travelling. But she’s never been just a traveller, as she’s worked as a pastry chef in a handful of Michelin star restaurants overseas, from Paris to Singapore.

“I had this urge in me wishing Ipoh had the same [kinds of desserts], and that locals wouldn’t need to go all the way to a 5-star hotel in KL or travel across the globe,” pondered Ann.

“Ipoh is my roots, my hometown, and no matter where I go, it will always be home. So if I were to start my own venture to share my passion for pastries, I’d have to share it with my family first, [who are] Ipoh-rians.”

So in 2019, Ann launched her own French pastry shop, être Patisserie (être) in her hometown of Ipoh.

Baking was a hobby for Ann since her childhood, influenced by her mother who often made classic butter cakes. Her passion in baking only started getting serious when she returned to Ipoh after her pre-university programme in KL.

To kill time while waiting for her university placement in the UK, she launched a small online bakery called Ann’s Wonderbar which quickly gained supporters. Though her pastry skills were self-taught at the time, she soon began supplying her goods to cafes in Ipoh too.

It was during this venture where Ann realised that if she was given one chance to choose her future career path, she wanted to ensure that it was something she had a passion for.

“So I thought to myself, why not pastry? I took a leap of faith and flew to Paris alone, without knowing how to speak their language and what to expect,” Ann shared with Vulcan Post.

In 2018, Ann travelled in and out of Shanghai and Suzhou as a pastry consultant at the Pastry Shop Project. Finally, she permanently returned home to Ipoh in 2019 to start être.

Creating desserts of her own

Every piece of être’s pastries starts with an idea, and to the 27-year-old, inspiration can come from anywhere. From world-class chefs to her surroundings, nature, art exhibitions, and even her emotions.

But to create a dessert, she must source ingredients that are often seasonal. If there’s a certain ingredient Ann finds interesting but has yet to understand its place in French pastries, R&D is conducted to test its flavour profile and pairings to complement the ingredient.

For her Mid-Autumn festival offering for example, Ann was faced with a challenge in balancing French and Chinese flavours in her mooncakes.

Plenty of trial and error was taken on by être’s 12-person team before they landed on their French and croissant mooncakes. They carried flavours like Golden Salted Egg, Oolong Lychee, and Black Sesame Azuki.

After determining a pastry’s flavours, Ann would conceptualise the presentation of the desert by sketching it out on paper. “I focus on 4 main things, texture, flavours, visual enjoyment, and emotions,” shared the chef.

It’s likely that the visual appeal of her mooncakes paid off, as être was able to sell over 500 boxes of their mooncakes during the season, where deliveries were even made to KL.

Apart from the unique mooncakes, Ann does hold one creation dear to her heart.

One creation that I will always be proud of would be the Hometown Tart, it is a coffee tart made out of Ipoh White coffee. It consists of 5 different layers of coffee cream. As you indulge into it, it presents you with a different layer of bitterness, sweetness and saltiness. Just like life.

Being a pastry chef and a business person are two worlds apart, and Ann described her biggest challenge being the juggle of kitchen work and managing her company.

There were times guilt would hit her for not being in the kitchen with her team as she went through the company’s paperwork and planned for expansion. However, she’s grateful that her team has been reliable, claiming they’re the best team she could’ve asked for.

“Every milestone that the company has achieved, I owe it to my parents and my team. I understand that I am leading a team that is counting on me, and that gave me courage to push through the circumstances,” stated Ann.

As KL and Selangor tend to be the hub of F&B experiences, Ann shared that she’s definitely planning to open another branch of être there when the time is right. In the meantime, être is set to open a second outlet by the end of this year.

Although être was able to deliver their mooncakes to KL, shipping her pastries interstate will only be available for seasonal items.

être isn’t the only patisserie for French pastries in Ipoh, but it is certainly an option amongst a handful (and I literally mean you could count them on one hand) of patisseries in that state.

While Ann’s intentions for starting être in Ipoh has sentimental value, it’s undeniably a strategic decision to open up in a less crowded space where locals lack options for French desserts. The business may even be able to leverage tourist traffic once it’s safe again, as être’s picturesque pastries would be attractive enough to try at least once, if not just for the ‘gram.

If she can continue to build être’s brand presence online, it could make things easier for her once she decides to expand to KL, as she would already have amassed a following from the area and other nearby states.

Also Read
Alibaba Cloud was a star player behind the scenes in this year’s Tokyo Olympics, here’s how