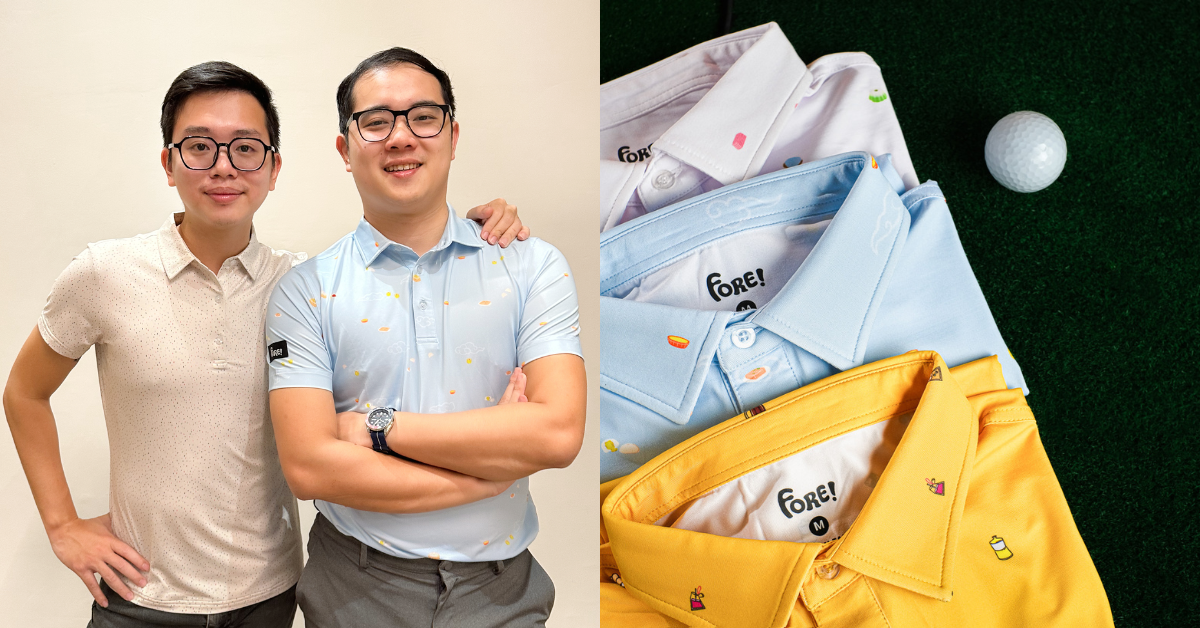 Of all things, it would be a tee-off at the golf course that turned into a lightbulb moment (and subsequently, a business) for Wong De-Vin (Devin) and Ryan Yee in the form of Fore!.

This was right after the first MCO, when golf was one of the first sports to be “reopened” due to its naturally social-distancing nature.

As they played, they noticed that there was actually quite a young crowd taking up the sport too, but then they observed another thing—the clothing being worn did not reflect their youthful spirit.

Believing that there was nothing in the market to solve that yet, they set out to change it.

Devin and Ryan are actually ex-ice skating national athletes, so how did they end up skating over to golf?

For them, it was a way to remain in sports, was one of the easier sports to pick up during the pandemic, and they found lots of similarities between golf and skating.

“Golf is very much an individualistic sport, with each athlete focusing on their own performance. On top of that, it is extremely technical, which we enjoy,” they shared.

Not to mention, it got them to “breathe fresh air outside”, they quipped.

Having zero experience in establishing a new business didn’t daunt them too much, as they had a shared confidence in their idea and the enthusiasm to learn first-hand what it was like to run a business.

Thus, the pair launched a golf apparel venture with designs to suit the younger generation.

“Many of our friends who took up golf always seem to end up looking like their fathers. This is mainly because a large majority of the golf apparel out there is catered to the older audiences,” they explained.

This is not to say Fore! is sold exclusively to youngsters though, as the co-founders also said, “We don’t see why older folks can’t be interested in our apparel; it makes them look 10 years younger!”

Be bolder, not older

The duo aims to use Fore! as a means to further attract the younger generations and rebrand golf as more than just an activity for the older and richer demographics.

As proud Malaysians, Devin and Ryan’s patriotic spirits are reflected in the designs of their products that are inspired by the local culture, such as our food or flora. These are made by their in-house designer.

Compared to typical striped or monochromatic polo tees in the market, Fore!’s take on golf apparel is a little bolder and more playful, ensuring that its wearer will subtly stand out as they make their moves.

Did you know: A slang for the putting green at a golf course is “the dance floor”.

Fore! currently only carries a polo shirt line for men, but the founders assured that women’s apparels are in the works. In terms of comfort, the brand’s apparel is made with Malaysian weather in mind.

The founders said, “[They are] moisture-wicking and also flexible enough to enjoy a game of golf.”

In terms of pricing, it could be said that their products (all RM149) are on the more affordable side when compared to established brands in the market.

For example, a simple polo from Tommy Hilfiger typically costs upwards of RM300, while one can expect to pay no less than RM500 for a polo from Ralph Lauren.

Yet, that’s not the only thing that differentiates the brand from others in the market. The founders also decided to go the humorous route when it came to marketing their products.

They call users of the brand “foreplayers” and come up with cheeky captions in the brand’s Instagram postings, where a majority of it is filled with puns and innuendos.

When asked the reasoning behind this marketing strategy, they clarified that these are the steps being taken to set themselves apart from the competition. It also helps to add character to the brand in a niche that is typically known for being a little dull.

Despite references to sex being typically taboo in our society, we’ve seen how smart and cheeky marketing has the ability to boost a brand’s growth when done right.

An example of this is Tudos, a local potato chips company we’ve covered that has also used this method to brand itself in the local market.

Being first-time owners of a business did come with some challenges attached, namely achieving the target sales they’ve set for the brand in order to recoup some cash flow and funnel it back into the company.

“Things like event sales have helped and could be a possible revenue [stream] to keep the company sustained,” they added.

They believe that coming up with more designs (of which there are now six) could help too, but acknowledged that this would take time.

“But in all seriousness, we hope to be able to build a culture and community with our brand, one that promotes the wonderful game of golf and does so inclusively. Sports is for everyone.”

Golf courses can be quite the social setting, so one could say that Fore! practically markets itself out on the green plains, where conversation can easily be struck up over their bright designs.