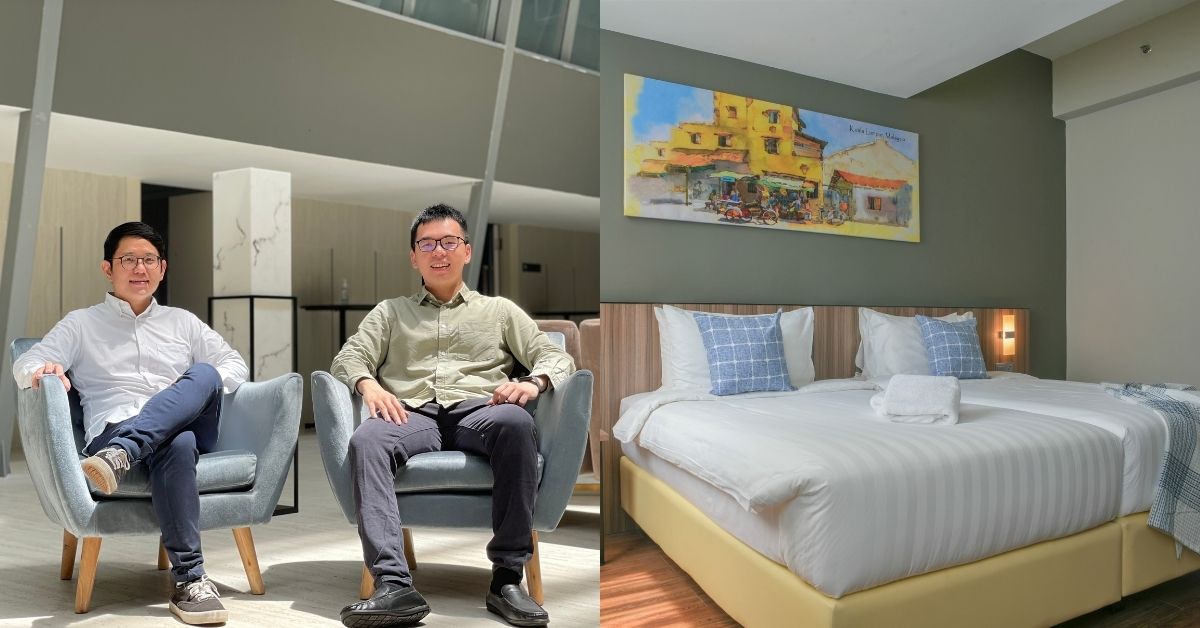 Towards the end of 2019, Jordan and Henry were already managing over 50 coliving spaces as a side hustle before deciding to quit their full-time jobs at RHB Bank and PwC respectively.

“What happened was, we were approached by a neighbourhood hotel to help them fill up their vacant hotel rooms a few months into the pandemic,” the duo told Vulcan Post.

Leveraging on their property management experience, they helped the hotel secure 30 guests who were looking to stay at a place for under 3 months.

They pondered over the many beautiful hotels in Malaysia, and how amazing it would be to convert a portion of their rooms into medium- to long-term stay accommodations.

“Spotting this new opportunity, we decided to create a rental platform for hotels to list their accommodation so that users can book them on a monthly basis at affordable rates. Thus, Roomah was born,” they shared.

Since the MCO, the short-term daily rental market dried up due to travel restrictions, and hotels were exploring alternative sources of income, the founders noted. Boutique hotel Langkawi Chantique pivoted to sell nasi lemak, Marriott Bonvoy began offering deals for the WFH crowd and delivered food on Grab, while KLoé Hotel held a two-day bazaar.

Despite the pandemic, Jordan and Henry observed that the occupancy rate in their existing accommodations remained at a healthy level. “Since we have been doing flexible mid-term monthly renting for some time, we decided there isn’t any harm in giving [renting out hotel rooms] a try,” they recalled.

It certainly posed a new challenge for the two who had no prior experience in working with hotels. But as the saying goes, “in every crisis there is opportunity,” they were able to explore the new business model.

Thus, Roomah began collaborating with 3-5 star hotels to provide short- to mid-term accommodation in the hotels’ vacant rooms. By working with hotels, the partners enable hotels to continue their operations and minimise job cuts due to the pandemic. They even helped a neighbourhood hotel generate an additional 6-figure revenue during the pandemic.

While hotels are allowed to set their own rental rates for each room, Roomah’s team will advise on a reasonable range while considering its surrounding properties, demographic, and location. Roomah then marks up the room’s cost by 10% to 15% before listing it on the platform, which is how the startup monetises.

Filling in the gaps

Roomah’s model targets working professionals and students looking for mid-term stays. Hence, its user base of 70 individuals thus far has seen interns, project-based employees, students, and expatriates who rent for an average of 2.5 months.

Guests are spread across the 7 hotels listed on Roomah which include Eastin Hotel KL, Days Hotel and Suites, and Pacific Express Hotel Chinatown.

Its founders claim that most accommodations for rent in Malaysia are either short-term (daily) or long-term (yearly). Jordan himself could relate to such a need when travelling for work projects and understands how difficult it is to find a suitable place to rent for a month or two.

“Pandemic or not, accommodation is something essential. Even with remote working practices, working adults that are already renting will continue to rent as they adopt a ‘wait-and-see approach’ to current working arrangements,” shared Jordan and Henry.

The team also pointed out that millennials and Gen Zs also desire more flexibility in where and how they live. “They prefer to not commit to traditional year-long leases so that they can move at the drop of a hat. Roomah can be a perfect fit as our hotel rooms are move-in ready and come with flexible monthly contracts,” they noted.

You could draw surface similarities between how Roomah and Airbnb operate, but it’s clear that the types of accommodation the two offer differ. To add, one advantage of Roomah’s accommodations is that hotels tend to be in more central locations, providing better convenience to guests.

Adding value to their offerings

On top of facing the age-old problem of having to convince a sceptical market about their startup’s model, Roomah’s team had another issue, laundry. Laundry services and kitchen facilities usually come equipped for long-term stays in specific hotel rooms, but may not be available for mid-term stays.

So, the team partnered with an outsourced laundry service to pick-up and drop-off their guests’ laundry. As for kitchen facilities, they are still in discussion with several hotels to build a communal kitchen so that residents will have the option to cook whenever they want to.

One quick fix I can see is to equip each room with a small portable induction stove, basic cooking utensils, and a proper set of instructions for how cooking in the room should be done. This way, guests can at least do some light cooking.

Being equipped with such a service has helped Roomah onboard more hotels easier, as the onus is no longer on the latter to expend money to provide these services.

Roomah’s long-term goal is to expand beyond Klang Valley to other locations that have similar problems such as Penang and even Bangkok.

If its plan works as intended, Roomah will also work with boutique hotel owners to convert their hotels into co-living buildings. This will create more affordable and flexible options for renters to live within the cities.

For the short term however, Roomah is looking to onboard 20 hotels and lease a total of 500 rooms in Klang Valley by the end of this year.