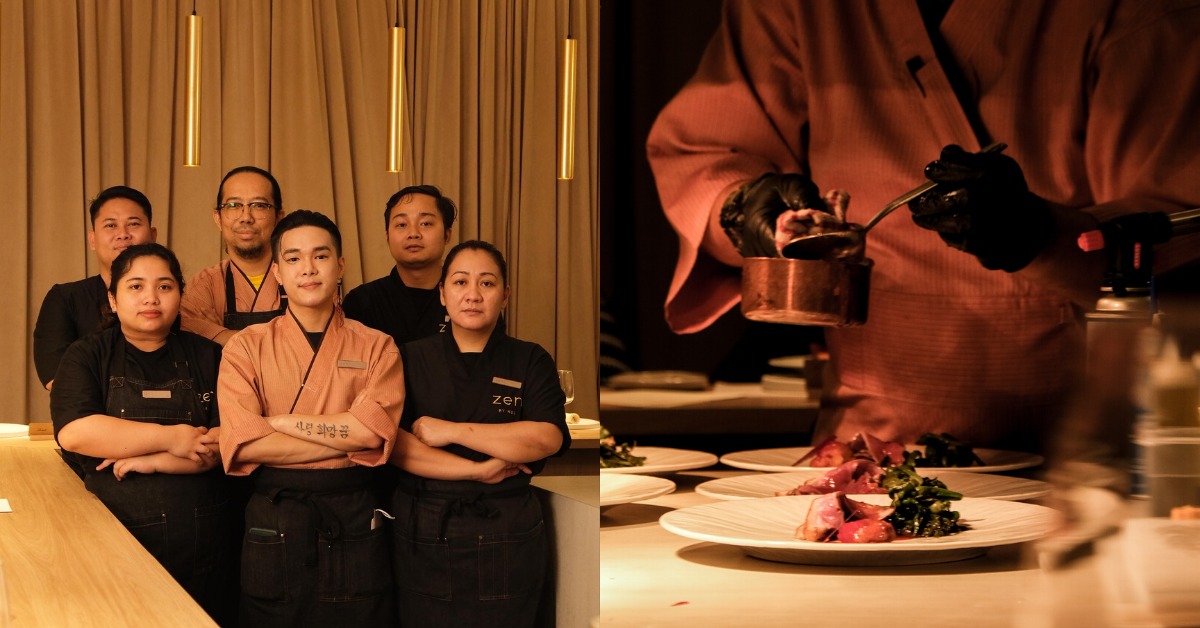 In 2020, Melanie Pong went from florist to F&B owner with the launch of CC by Mel. The next year, she expanded it to a larger space in Bukit Jalil.

Just a few months later, she fulfilled a greater ambition and opened up Zen by Mel, a fine dining establishment that caters to Japanese fusion food enthusiasts.

This, she aims to bring onto lists like Asia’s Best, Tatler, and Michelin.

A throwback to their beginnings

CC by Mel began with a dream to launch a cafe infused with floral concepts, a subtle nod to the founder’s ex-profession.

This was a daring move as the pandemic-driven MCO 2.0 had caused Melanie’s previous floral business to suffer. But she took a gamble and ended up making revenue of RM200K per month within the first year, she had shared in our previous interview.

Taking her dream to the next level, she relocated CC by Mel to a more spacious area, where the brand also elevated itself to a “premium semi-fine dining” restaurant. Despite the price increase this caused, customers still flocked to its doors and Melanie began thinking of franchising the business.

But not long after the expansion of CC by Mel, she realised that the premium casual dining restaurant had its limitations. “We were bound by the cost price to sell within a set range,” Melanie explained.

There had to be some way to go beyond the price tag, to explore more premium ingredients and let their imaginations run wilder. The experience gained from managing CC by Mel made her more interested in breaking the barriers of local fusion cooking.

“There is plenty of room to do more than what we can do. Especially [when it comes to] fusion food, combining different cultures requires a lot of good ingredients. And our loyal customers are hungry for more exciting food,” Melanie said.

Thus, she opened a sister brand to accompany CC by Mel. This time, she went all-out and ventured into the omakase fine dining scene.

You might have noticed that there’s been a growing trend of new omakase dining spots populating the Instagram feeds of Malaysian foodie sites and bloggers lately.

The word “omakase” derives from the phrase “omakase shimasu”, which translates to “I trust you, chef.”

What this traditionally means is that diners leave the tedious task of figuring out what to eat to the chefs. Each dish is specifically tailored to the palate of the diner. The room for creativity allows the chefs to do what they do best, while also being more sustainable as fresher and seasonal ingredients are used.

That said, there are variations of omakase that slightly differ, such as where a fixed menu is curated by the chefs with a small room for adjustments upon request. This is the approach that Zen by Mel took.

Sometimes playing it safe could pay off

Melanie stuck to familiar territory, so Zen by Mel is currently located in Bukit Jalil. Surprisingly, it’s also within walking distance of the founder’s first venture.

When asked why, she explained that she believes it’s a booming town and wants the Mel Group to be a flagship brand in the area.

“We would like to tap the middle to upper market in this area. [Other] affluent neighbourhoods have plenty of choices and they are flooded with fine dining [spots]. [There is] less competition here.”

In terms of the food, Zen by Mel sticks to the founder’s philosophy since the beginning of her venture into the F&B industry—mixing Japanese cuisine with local flavours for more accessibility.

“We are constantly thinking of what we can offer more to our customers. And Zen is a place where we add a Malaysian twist into it (Japanese fusion) to suit our Malaysian taste buds,” Melanie said.

Although there have been quite a few cafes with fusion food popping up lately, Melanie feels that there remains a gap in the market as the concept is still new in Malaysia. She hopes that her restaurant can help to bridge that gap and expose the cuisine to more locals.

The Japanese fusion that Zen by Mel offers Malaysians is about the blending of ingredients, food cultures, and techniques. “We fuse [the local] with the Japanese [culinary style] and bring the best out of them,” the founder explained.

Concept-wise, she described the Japanese cooking style as more direct and basic than Malaysia’s variety, so fusing the two was challenging and required a lot of effort.

To meet the aspirations set for Zen by Mel, two specially-trained chefs were handpicked to run the show. Chef Jordan has eight years of experience working in a Singaporean Michelin restaurant, while Chef Mohd Shafik with a background of 27 years in European cuisine acts as Chef de Cuisine.

Together, they work hand-in-hand to bring the restaurant’s quirkily curated menu to life right in front of diners.

When talking about the differences between running her two businesses, Melanie shared that her team had to accustom themselves to managing hard-to-source ingredients with shorter shelf lives.

“Handling the ingredients (for Zen by Mel) is even harder than CC by Mel as most of them are air-flown. A simple mistake in handling would end up in high wastage too. All of the dishes have to be prepared on the same day or on the spot, which takes a lot of time.”

With Zen by Mel catering to the premium market and CC by Mel targeting the semi-fine dining crowd, it seems that Melanie’s got her hands quite full.

Yet, she is determined to continue expanding in the F&B industry. The Mel Group has plans of launching a modernised kopitiam with baked goods called MEL’s by mid-March this year.

I don’t know about you, but I’m excited to see what fusion twist this passionate restaurateur will bring to the kopitiam scene next.

Also Read
Hopping into a festive Peranakan house, what does a DJ rabbit have to say about CNY?